Sun, beaches, nature, but not only. The Cinque Terre also contain architectures that highlight an ancient history and something magical.

The name that derives from the five seaside villages that are located in the 15 km of one of the most pristine Mediterranean coasts of Liguria.

Following the paths of the 5 villages

The crystal clear sea and the network of paths that offers varied landscapes have made the Cinque Terre today among the most popular destinations for tourists.

The first town located in the western part is that of Monterosso al Mare, the most populous of the villages.

Located in the center of a small natural gulf, protected by a modest artificial cliff, it contains within it stretches of fine gravel beaches. But interesting of this village are not only the beaches, but also the monuments, such as the medieval Aurora Tower, which divides the old village from the new one, the “giant statue” and the hermitage of S. Antonio del Mesco. 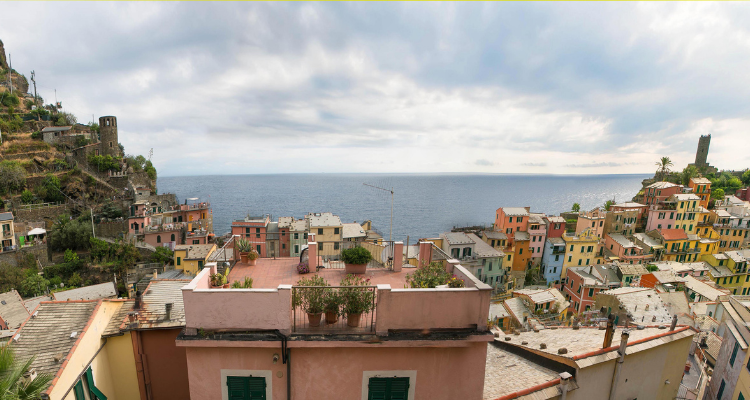 Proceeding east, climbing a small promontory that fits into the sea, you will find Vernazza, where there are valuable architectural elements that testify to the economic and socially superior level of life of the past. 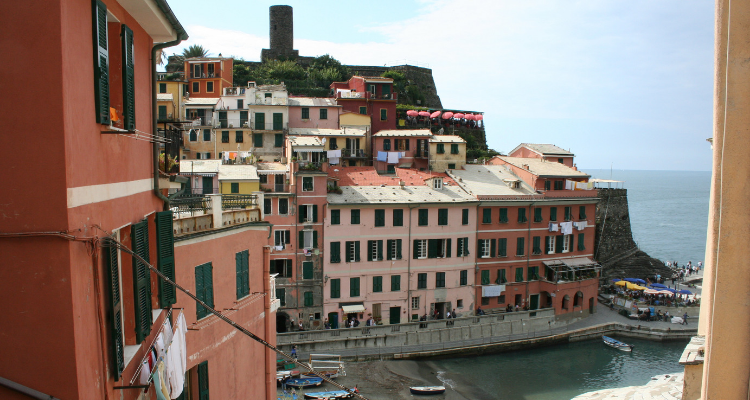 Centrally located is Corniglia, the only village in the Cinque Terre that does not directly overlook the sea. To reach it you need to climb a promontory, through a staircase of almost 400 steps called “Lardarina” (or alternatively you can take the road that connects it to the railway station). 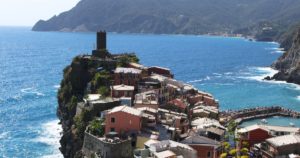 Another village located on a promontory is Manarola. It rises in the terminal part of the valley of the Groppo stream and the houses face one another close to the other on the main street. The splendid “Via dell’Amore” also starts from Manarola, carved into the rock wall, a road famous all over the world for its beauty and its breathtaking views, declared by UNESCO a World Heritage Site. 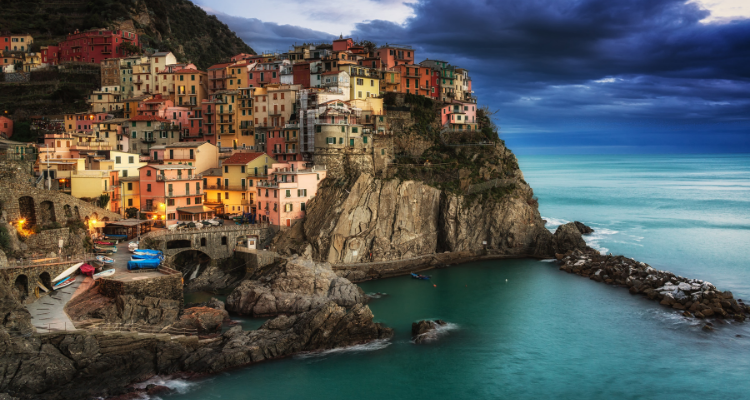 Road that you can walk in peace until you get to Riomaggiore, the easternmost village of the Cinque Terre.

The historic center, whose original core dates back to the 13th century, is made up of several parallel orders of Genoese tower houses that follow the steep course of the stream. Due to the floods that have affected this region in recent years, some paths are closed for a long period (it is in fact expected to reopen in April 2018) so before venturing into these areas it is recommended to check the various updates on the dedicated websites, in so as not to find unpleasant surprises. 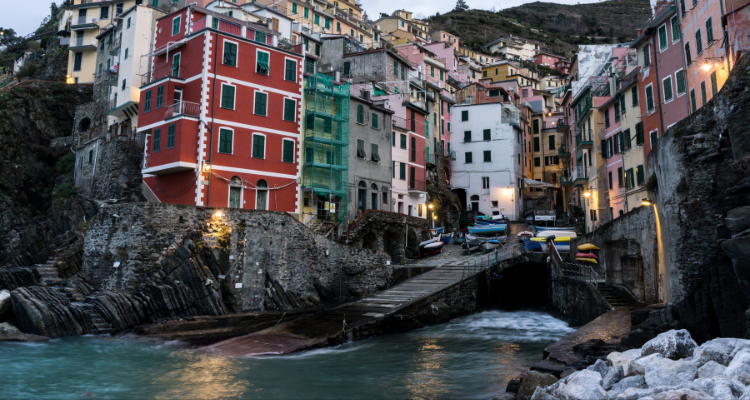 In Cinque Terre there are a large number of beaches for all.

Walking on the blue path, tourists can go down to the sea at any time.

Generally they are all free, and some offer paid services, such as bars, umbrellas, deck chairs, showers etc.

A characteristic of the coast is that the wind hardly ever blows, so swimming is pleasant even when it is not too hot. 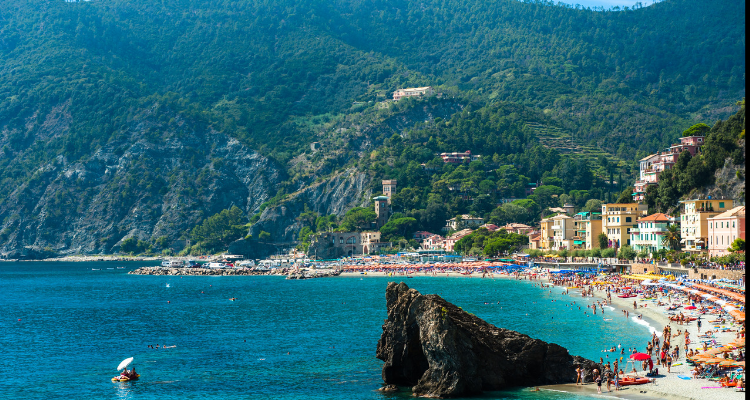 First Protected Area and then Regional Park, the Cinque Terre became National Park in 1999, a tool to safeguard a unique environment in the world.

In addition, the territory between Punta Mesco and Capo di Montenero has been declared a Natural Marine Protected Area to preserve the beautiful seabed.

Furthermore, due to the presence of whales and dolphins, these waters are part of the Cetacean Sanctuary. 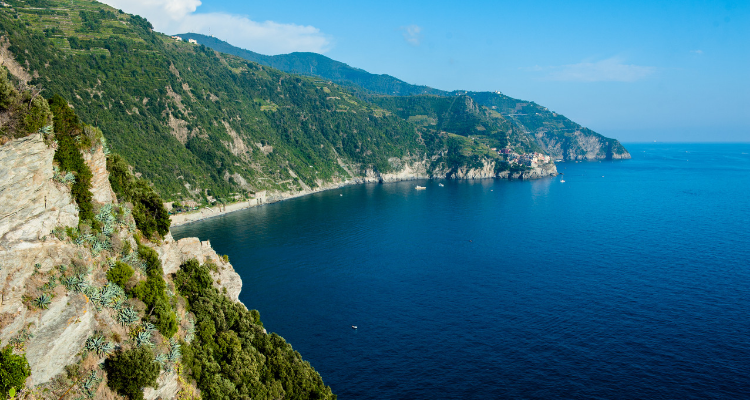 The cuisine of the Cinque Terre preserves the characteristics of the past almost intact. The mild climate allows the cultivation of olives, citrus fruits and viticulture. The top product is certainly the “Sciacchetrà”, a rare and precious liqueur wine famous all over the world.

Another famous product is the “limoncino”, a liqueur made from the tasty lemons of these lands.

Obviously, being in Liguria, the home of basil pesto, be sure to take a first course with good local pesto. 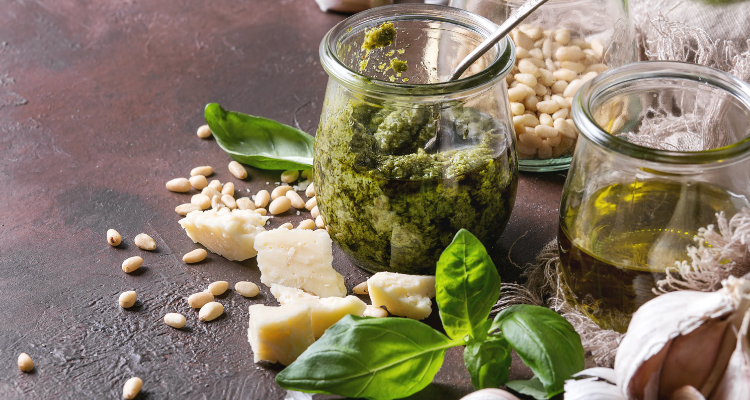 If you love fish, here you will be spoiled for choice between the famous salted anchovies of Riomaggiore, the frying of whitebait, the cuttlefish of zimino rock, the octopus and the stuffed squid.

On the table of the five coastal villages you can taste the typical Ligurian dishes, especially the Genoese pesto, especially the fish dishes, with some local specialties.

One of the most typical desserts of the locality is certainly the tart with lemon jam.

Now, after west Liguria, its hidden villages, the city of Genoa and Cinque Terre tour, you to find the your perfect experience for your next holidays in Liguria with Elite Luxury Tours! 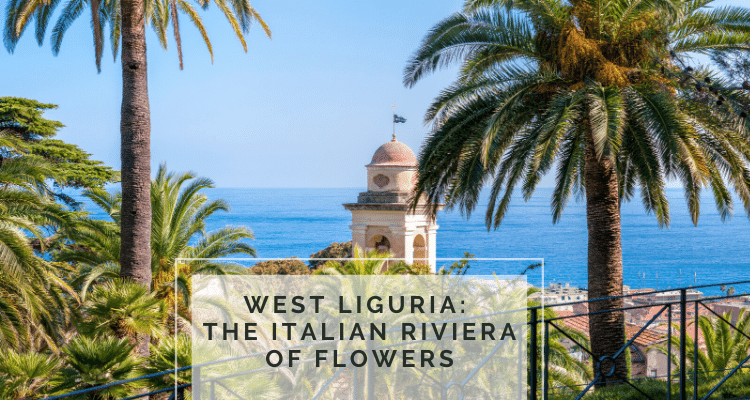